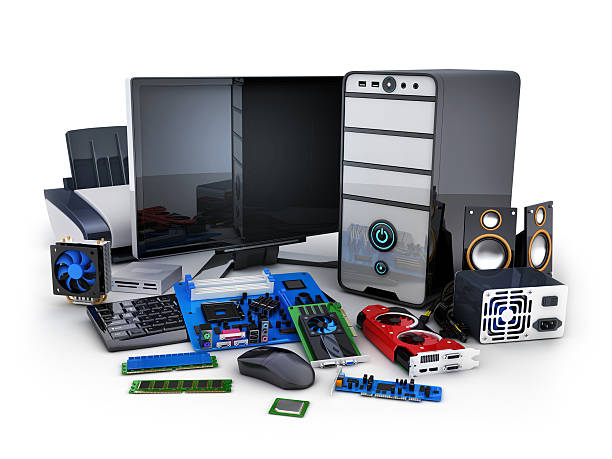 The motherboard is smaller than an 8.5 x 11 sheet of paper. The CPU and RAM memory are in the center, and support chips are to the right. One chip has a copper “heatsink” covering it to dissipate heat. The heatsink was quite large. The processor – or CPU – was the main heat source. This heatsink helped dissipate the heat that the chip generated.
CPU

The CPU is the central processing unit of a computer. It controls all the functions of the computer, from reading data from the memory to directing the operation of other computer parts. The CPU performs arithmetic operations, which are repeated until the desired result is reached. Computers are divided into four major parts, each performing a specific function. The CPU has an internal register, which stores data from read operations. During subsequent cycles of operation, the CPU processes data according to the relevant instruction.

A CPU is typically a two-inch ceramic square containing a silicon chip, about the size of a thumbnail. The CPU is a heat-sink-covered chip, and its speed is measured in megahertz or gigahertz. The higher the number, the faster the processor is. The CPU has several components that contribute to its speed, including RAM, which is the short-term memory of a computer.

The CPU is the central component of a computer and must work with the other hardware parts to run properly. It is made up of three major types: arithmetic unit, logical unit, and control unit. These components work together to process complex computer programs and handle various tasks. The CPU is an integrated circuit that integrates millions of small electronic parts and arranges them into a single circuit. Computers also include other computer parts such as graphics cards and auxiliary storage units.
Monitor

A computer’s monitor provides the display activity of the computer’s video card. Newer monitors use LED or LCD displays. They’re also thinner, often called flat panel displays. Older monitors use CRT displays and are heavier, taking up more desk space. Many monitors have control buttons and built-in speakers. The most modern models use LED displays, which are backlit by light-emitting diodes.

The history of the monitor is long, and the first computer monitors were made in the 1940s for military and scientific applications. Over time, however, the monitor became a standard part of everyday life. In most cases, a computer monitor is a flat panel display and includes several components. It is also a key component of a computer’s operating system. In addition to the screen, the monitor contains the processor and signal-handling devices.

The display’s pixel clock determines how many pixels are displayed each second. An HP monitor runs at 165 MHz when it is connected to digital devices and 200 MHz for analogue ones. Considering the panel’s 2,073,600 pixels, this means the pixels can update approximately 79.6 times a second. To help determine which monitor is best for your needs, look for the maximum refresh rate and response time.
Power supply

When choosing a power supply for your computer, you need to consider several factors. The power supply’s capacity is important, but the actual capacity of the unit depends on the number of rails. For example, a regulated +12V rail will provide power to the most power-hungry components, including processors, memory, and PCIe video cards. It will also include information on the safety certifications that are provided. The label will also show what type of connectors the power supply comes with.

In addition to its physical function, the power supply is an essential part of any computer. The power supply takes alternating current from a wall outlet and converts it to a low voltage suitable for your computer’s parts. It controls the voltage and prevents overheating. A power supply is often abbreviated as a PS or P/S and is rated in watts. The higher the wattage, the more powerful the computer is.

The power supply unit also has a number of output voltages. It can deliver positive and negative voltages, which are often referred to as “rails.” Different voltages are used for different components, so it is important to understand the limits of the different types. Some power supplies feature multiple rails that can deliver more current than others. Regardless of the type, you should know which type of power supply will meet your needs and ensure that your computer works properly.
Storage memory

The memory in a computer is the device that stores data, programs, and sequences of instructions. Information is represented in binary code, which is made up of 0s and 1s. An electronic circuit can store binary digits using an electrical capacitor, an on-off switch, or a surface with a pit. But these components are only one part of a computer. Each part is essential for a computer to run.

The storage cells in the RAM have addresses, so that they can be accessed quickly. In the 1950s, the magnetic drums were used as auxiliary memory and main memory. These devices were expensive, but they could handle very large data volumes. By the 1960s, magnetic core memory (MCM) was created. These devices consist of a wire grid with tiny ferrite cores. When current flows through these circuits, it changes the alignment of the individual cores, which is the basis of the memory’s ability to store and retrieve data.
Hard disk drive

Hard disk drives consist of a series of interconnected components, including two electric motors and an actuator. The spindle motor is used to rotate the disks and the actuator motor is used to position the read/write head assembly across the spinning disks. These components are made of a special plastic material that resembles a spring and are attached to the external rotor. A thin printed circuit cable connects the read/write head assembly to the amplifier electronics, which are mounted on the pivot of the actuator. Modern drives can achieve 550 g of acceleration at the head.

The mechanism used to move the arm on the hard drive is called the controller. It interprets the data sent to or read from the drive and instructs the components on how to move. A typical small hard disk has one platter with magnetic coatings on both sides, while larger hard drives use multiple disks stacked on a central spindle. Each platter is usually separated by a small gap. The movement of these parts is crucial for transferring data and instructions between the hard drive and the computer.

The size of the hard disk drive is measured in megabytes, and a typical modern HDD consists of between one and four platters. A modern HDD is typically one to four platters, with the capacity calculated by the C/H/S method. The capacity published by an HDD may not include the spare capacity for defect management. As a result, an HDD with an earlier capacity would reserve certain sectors for spare purposes and thus reduce its available capacity to the operating system. Modern hard disk drives also store firmware in a reserved service zone, which is not visible to the user and is not included in the capacity calculation.
Transistor

A transistor is a basic electronic component used in computers. They work by controlling large amounts of current and voltage. Transistors can be used as a switch or a binary circuit in digital processors. A transistor’s collector gate opens when it receives an electric signal greater than or equal to five volts. The technology that makes transistors possible is based on semi-conductive materials. While we normally think of metals and other conductive materials, ceramics, wood, and glass are all considered non-conductive.

The most common type of transistor is the bipolar. Bipolar and field effect transistors are used in electronics. Transistors are often marked with a code that tells them what type of information they contain. Transistors are also used in half-adders and full adders. These devices are the basic building blocks of microchips. If one wants to know more about the transistor, here are some facts you should know.