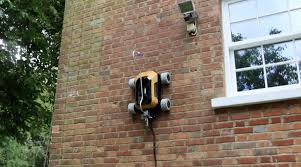 Wall Climbing Robots are highly versatile machines that move over complex 3D environments and perform a variety of tasks. These robots can be used to replace human workers in potentially dangerous environments and eliminate the need for expensive scaffolding. As climbing robots are self-supporting, they can carry sensors and tools. These devices also require an appropriate locomotive and adhesion mechanism to climb up walls. Eventually, we’ll see climbing robots in action in the construction industry, from construction sites to skyscrapers.
Wall Climbing Robots

Wall climbing robots are devices that climb vertical walls to achieve a certain level of height. The technology requires high maneuverability, efficient attachment, and robust detachment. Using these machines in the workplace could help prevent or reduce workplace injuries and accidents. The machines are also capable of moving in all four directions and can perform dangerous operations such as cleaning, maintenance, and inspection. To achieve these tasks, these machines need to overcome obstacles that can be in the way of their movement.

Researchers have made wall-climbing robots with permanent magnetic crawlers and single suction cups. These robots are designed to clean glass surfaces and ceramic tile surfaces in high-rise buildings. In addition, they are capable of performing remote-control inspections of nuclear storage tanks. These robotic systems are also capable of inspecting boiler wall water tubing. The researchers behind these machines are preparing a new robot platform that will enable them to clean the high-rise buildings and nuclear storage tanks.

The development of these robotic systems has taken place for decades. In the 1960s, the first vertical robot was developed by Professor Nishi Akira in Japan. The robots were then tested for a year and began to be used in production in the late 1980s. China also began research and development in this field and developed the first wall-climbing robot. This was a breakthrough for robotic technology. The new technology is becoming an indispensable part of everyday life and has many applications in industrial and commercial industries.
Ice Worm

The Ice Worm climbing robot is the product of the extreme environments robotics group at NASA’s Jet Propulsion Lab. It has been designed to scale the mountainside of Mount Erebus, the second highest volcano on Earth. Because the volcano is filled with CO2, it could contain ancient DNA. Researchers hope the robot can explore the icy worlds of Jupiter and Saturn. They are currently developing miniaturized remote sensing instruments. The Ice Worm climbing robot could be launched to such distant destinations as the icy moons of Saturn and Jupiter.

The Ice Worm robotic limb is based on a single LEMUR limb. It moves forward by contracting its body and drilling into ice walls. It stabilizes itself while taking scientific samples and can use the same technique to drill down. The robot’s AI uses past data to improve its performance and prevent errors in the future. The Ice Worm can also learn from its mistakes and can adapt its maneuvering style.

The robot has been tested in real-world environments. In the summer of 2016, researchers tested a prototype robot’s feet in the Mothra Cave on Mount St. Helens, Washington. The robotic arm was constructed on sleeping pads in the cave floor and was guided by a scientist using a laptop. During the tests, the robot successfully scaled the ice wall and collected samples of tephra. The IceWorm climbing robot will open new frontiers in planetary missions.

The Ice Worm climbing robot is four and a half feet tall. It uses steel alpinist screws that allow it to move inch-by-inch on icy surfaces. The Ice Worm was originally developed for the DARPA disaster relief robot program and is a prototype of its successors. Its four-legged structure allows it to walk, crawl, and slide on its belly. The Ice Worm climbing robot will be an incredibly helpful tool in exploring the frozen moons of Jupiter and Saturn.
HausBots

These climbing robots were developed by a team at the University of Warwick and Wits Medical Group (WMG). This partnership was to create a product that could tackle graffiti problems. The team tested their prototype in an EMC chamber, using analysers and amplifiers to mimic noise emissions. Professor David Norman hailed the innovation as ‘incredible’ and said that the robots could save lives. They are already used in Birmingham, where they have cleaned graffiti from a spaghetti junction road interchange.

The HB1 version of the HausBot is designed as a utility robot, and can carry payloads of up to 13.2 pounds. It can also carry small items and can be equipped with a nozzle to paint tall buildings. Unlike conventional climbing robots, these climbing robots can climb walls and other vertical structures. Their unique design makes them great for a variety of applications, from wall painting to inspecting infrastructure. If you’re interested in purchasing one of these futuristic robots, register at the company’s website.

While there are countless benefits to using these robotic systems in a work environment, many workers fall from heights every day. The accidents that occur due to workplace falls cost the insurance industry $1 billion dollars per year. The HausBots HB1 robot can prevent workplace accidents by performing high-altitude works, HD visual inspection, and building surveys. This robotic solution can even be supplied from the roof of a building. The robot is capable of climbing up to ten feet high.

The HB1 is capable of traversing smooth, curved, and rough surfaces. It can even drive over common obstacles, such as pillars and wires. But the HB1’s fans consume a lot of power, so the robot can’t run on a battery alone. It needs a power source for full-time operation. But it’s still impressive for many purposes, including inspection, maintenance, and painting.
Electroadhesion

While suction cups and magnetic grippers work only on smooth surfaces, electroadhesion works on all types of surfaces, including walls. Because electroadhesion works on any surface, climbing robots will have a hugely expanded range of uses in security, military, and general industry. Here are some examples of applications for wall climbing robots:

HAMR-E is an example of this. This centimeter-scale climbing robot can explore any type of structure. The robot can be programmed to climb and explore a wide range of structures, including jet engines. It is able to climb to a maximum of 215 steps in vertical locomotion, while still ambulating at a rate of 140 millimeters per second on flat surfaces. Its ability to climb vertically and ambulate around curved parts of a jet engine is particularly impressive.

To climb the walls of a building, climbing robots need to adhere to different surfaces. The principle of adhesion force, magnetic adhesion, is one option for this purpose. Although magnetic adhesion is fast and requires heavy actuators, it is only suitable for certain environments. Therefore, this technology is not suitable for most climbing robot applications. Here we propose a new solution to this problem. We present the footpad design of a climbing robot and experimental results of its operation.

A climbing robot is a wheeled mobile machine with an adhesion force mediated by permanent magnets. Its design and function is intended to inspect ferromagnetic structures. Its mechanical and electrical construction, control architecture, and human-machine interface are critical to its success in this mission. The robot has the capacity to climb up a building with a variety of obstacles. This is a promising approach for climbing robots.